Who would have thought it?  Well I did.  …And since I’m typically not the first guy to think of the hot new idea, that means others are well ahead of me.  I’ve had friends reloading the steel cases you see loaded freshly from brands like Wolf for a number of years.  They’re careful and they inspect things thoroughly.  The people all say the same things.  “We pick them up with magnets, we’re careful about our reloading procedures, we don’t max pressures, etc. and we get along fine…”

So will a two piece nickel/aluminum-stainless steel case do the trick?  I say, why not try it?  The claims include:

I’ve gotta tell ya…  That’s a fine list of attributes.  The most common thing I hear from people who poo poo the reuse of steel cases?  “It’ll wear your dies out quickly…”  I have to ask you guys, when was the last time you wore out a die?  So if I only get 150K rounds out of a resizing die that costs $20, am I really at a disadvantage?  I’d say not.  Granted, I just yanked that number out of the sky, but you get my point.

Read this article.  I think I’m ready for a better mouse trap.  What about you?

A quick response to a question I was asked by Bob from Creative Arms about whether the HPA would be passed or not.  Here’s the article the question stemmed from: 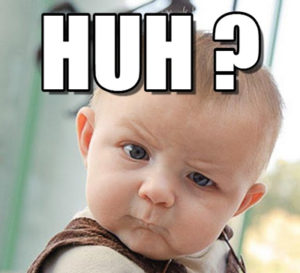 Here’s the ARTICLE from Army Times.  Yup.  So what is our response?  Do we even need to say anything?  Is it necessary to weigh in?  Hell yes it is…

I’m somewhat reserved on this one, but hopefully testing was thorough a and good decisions were made.

Personally, while I admit freely I’m a Glock fan, I’ve been elbow deep in so many weapons for so many years, I’m not shocked to see this playing out like it has.

While nobody learned could argue there is a more simple weapon up for consideration than an average Glock, simplicity isn’t the only consideration. There’s a trend towards modular, and it is being pushed heavily. Personally, I think it’s pretty dumb. But… I can see why.

As I was leaving the power systems industry I had many customers that were literally building mediocrity into their business plans.  No joke.  Many were scrambling to achieve two things.  First, they were trying to automate everything possible to avoid the reliance on human beings.  Second, they were forecasting significant decreases in proficiency as they projected the ‘younger’ generation coming into the workforce would simply not put out “X” amount of work in an average 40 hour week.  That’s troubling.  I suppose you can either prepare for the future by making things idiot proof or you can elevate your people.  The Army has chosen to embrace the dumb.

We tried to make a modular ‘fighter, bomber, surveillance’ jet and it appears to be good and terrible at the same time. We also have to consider the armed services want parts hangers and not smiths. so they probably benefit from sub assemblies you take out and chuck in the trash while popping a new one in. This is wasteful and costly, but easy for folks. 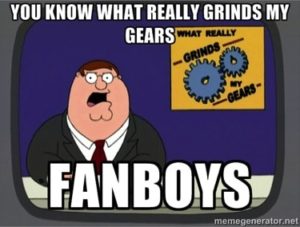 I recently had a discussion, on facebook of all places, that turned south quickly, but came back around in the end.  Short version?  I happened across a post from a friend that expressed unhappiness with the lack of professionalism as well as the “me, me, me” attitude at SHOT show this year.

I posted a response basically backing his play, and mentioned that the ‘fan boy’ craze wasn’t helpful to the industry nor was it wise to cater to it.  I was met with resistance.  A gentleman I’d never met reminded me that while some of the guns, gear, and practices some of these folks choose are silly, they represent a large portion of the market and will continue to grow.

Now…  I’m not sure I agree with him on how much market share the fanboys occupy, and I believe that it probably won’t push out the common sense firearm enthusiast, but it gave me pause just the same.  A blog post like this isn’t helpful if you don’t define what a fanboy is.  There are some who would call it a loyal follower of a product.  There are some who would define them as net rangers or keyboard commandos.  There actually may be some of both.  But I’d rather relegate this moniker to the folks that push their gear because they own it.  Therefor, it’s the best and only way to get the job done.  Just ask them.  They’ll tell you.

I have no problem with loyalty.  I seek it in my customers.  However, of two virtues that are both good things, there is often an order in which you place them.  I’d take truth over loyalty seven days a week and twice on Sunday.  While it is flattering to hear the “CCA” name tossed about, I’m hoping that along with that name comes quantifiable expressions as to why the advocate is voicing their statement.  Does that make sense?

I’m much more interested in the “how and why” something has gained your favor than just about anything else.  If you roll up in a thread to tell me how a Ford pick up is the ONLY truck worth buying, I’ll probably giggle a bit and quit reading.  Why?  Because you are simply justifying your purchase or choice as an owner.  If you haven’t owned a Ram 1500, a Chevy Silverado, a Toyota Tundra, or some of the others, you don’t have much honest comparison you can make.  Granted, not everyone can own everything.  I understand that.  So at a minimum you should be able to extrapolate how many miles you put on it, what repairs it has needed, the handling characteristics, the climates in which the truck is operated, etc.  If you don’t provide some personal background and also don’t offer some specifics, you haven’t actually contributed jack shit. 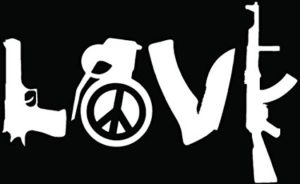 It is this ethic that has permeated the firearms and outdoor industry I’m not enjoying.  Do I think it’ll be present for nearly ever?  Yup.  Do we have to encourage it?  Nope.  Can we discourage it while turning those fanboys into positive catalysts for change in our favorite industry?  You betcha.  So let’s do that…

I’ve been told a hundred times and I’ve read the same, that genuine content makes the difference in whether customers find value in you as a person and a company.  I believe this to be true.  A friend of mine continually says about the volunteer Second Amendment organization he runs that “we get real results by doing real things for real people” and the fact is, I think he’s spot on.

I, we, at Controlled Chaos Arms really want the opportunity to earn your business.  Equally, we want to retain it.  We are seeking to exceed your expectations.

A mistake can creep in from time to time, as that’s just the reality of any business.  How those problems are resolved goes to the question of character.  Character whether within an organization or business is the sum total of the people within it.  I believe we have some great people and I’m proud to work alongside them.

Our goal and intent for this blog is to provide you with thought provoking content.  We truly are hoping to continually provide you narrative, videos, and still pictures that help you consider things more thoroughly, inform you, and/or provide you with ideas.

As we expand this concept it would be logical to see a few twists and turns until we settle into a blend of fun from our side and value from your perspective.  After all, if we’re not having some fun, where is the sense in continuing to do it?

Thanks in advance for your time, energy, and most of all your patronage of CCA.